Cardinal praises work of Apostleship of the Sea

Archbishop of Westminster Cardinal Vincent Nichols recently visited the port of Tilbury in Essex, one of Britain’s three major container ports. He had come to learn about the work of Apostleship of the Sea (AoS) and meet its Tilbury port chaplain, Wojciech Holub, who is based at the seafarers’ centre.

“It was a great pleasure to be on the quayside and near the sea, because quite a lot of my youth was spent in Liverpool, where I was very familiar with the docks and would be down at the sea most days,” said Cardinal Vincent.

During his visit, wearing a high-vis jacket and a red hard hat, he met a number of seafarers, most of them working nine-month contracts on ships, which mean they see little of the families. “To see the men who work on these huge ships in a way I’ve never done before is really very impressive. I appreciate their professionalism and dedication and the sacrifices they make to support their families,” he said.

“I was surprised to learn about the limited opportunities crew members have to get off the ships and to do the things you can’t do on ships, such as shop, go to church, get medical attention if they need it and contact their families at home. This is where the Apostleship of the Sea chaplains are so important, because they make these things happen. Otherwise seafarers might end up spending the few hours or days they spend in port in the same environment.”

He added that a greater appreciation and knowledge was needed about the key role seafarers play in our lives. “Nearly 95% of what we consume in Britain arrives by ship. We are utterly dependant upon shipping to continue and to prosper. So we should be more aware about those who serve us in this way and of the way Apostleship of the Sea supports them.” 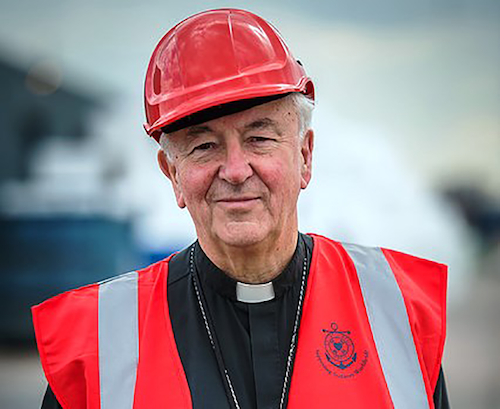