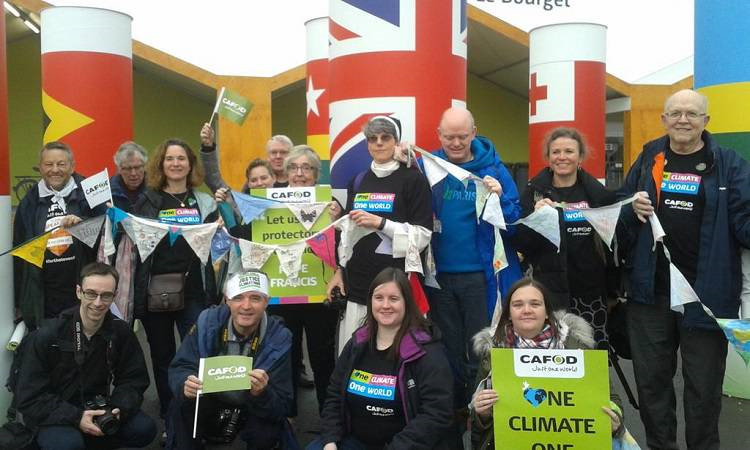 CAFOD has welcomed the historic climate deal agreed today in Paris, which opens a new chapter for action on climate change.

We came to the climate talks to advocate for an agreement that would protect the world’s poorest people. We wanted a fair and just legally binding deal that limited temperature increases to no more than 1.5°C, guaranteed finance to help countries adapt to climate change, phased out fossil fuels entirely in favour of 100% renewable energy by 2050 and included reviews at least every five years so countries could regularly ramp up their ambition.

We believe the Paris agreement marks the start of a new era of action on climate change. While the deal does not set a mid-century deadline for full phase out of fossil fuels, it does make clear the world must transition to a low carbon future. It says temperature increases must stay well below 2°C, and ideally be kept to 1.5°C, and the agreement opens the door to five-yearly reviews, with the first global stock-take to take place in 2018.  Developed countries have reaffirmed their commitment in the deal to support poorer countries financially to cope with the impacts of climate change and recognised their historical responsibility, having contributed more to the problem of climate change, to support vulnerable countries who are impacted.

Find out why the Paris talks are so crucial

“This agreement opens a new chapter for action on climate change, with a target of limiting temperature increases to 1.5°C. The deal will have countries coming back to the table, where they will have to show the world how they are increasing their ambition to meet that target.

“For poor people living on the front-line of climate change this deal offers hope for a brighter future, but not yet the security that we’ll get there quick enough.

“The agreement represents a start towards what Pope Francis calls a global common plan where we put the needs of the most vulnerable first. Now we all need to redouble our efforts to guarantee the safety of future generations.”