CAFOD partners are reaching those affected by Ebola outbreak

Ebola virus is a severe acute viral illness often characterised by the sudden onset of fever, intense weakness, muscle pain, headache and sore throat. This is followed by vomiting, diarrhoea, rash, impaired kidney and liver function, and in some cases, both internal and external bleeding.

 Ebola first emerged in the Democratic Republic of Congo in 1976, and over the years in a number of separate outbreaks, the disease has killed around 2,000 people. It is thought to infect humans through contact with infected animals, including chimpanzees, fruit bats and forest antelope. It can then spread between humans via bodily fluids.

People who are infected with the current strain of Ebola on average have only a 40% chance of survival – in many cases less, given the low levels of health services available in the rural areas of West Africa where it has hit. There is no vaccine and no known cure. The only treatment is keep the patient hydrated, as is the case with most fevers. Patients have a better chance of survival if they are diagnosed early and receive early treatment.

How is it transmitted?

The virus is transmitted between humans via bodily fluids, and via surfaces that a sick person has come into contact with – for example, bed sheets or shared towels. Even funeral ceremonies for Ebola victims can cause risks, if mourners have direct contact with the bodies of infected people.

By following a few important procedures, the spread of Ebola can usually be stopped relatively easily. Patients need to be kept in isolation, and their nurses or visitors must wear protective suits or avoid coming into direct contact with them. One reason that the virus has spread so extensively in West Africa is a widespread fear and lack of trust in the advice given on Ebola prevention.

Many people don’t have access to reliable information, and high death rates and stigmatisation make people afraid to take their loved ones to hospitals, even if medical facilities are available. 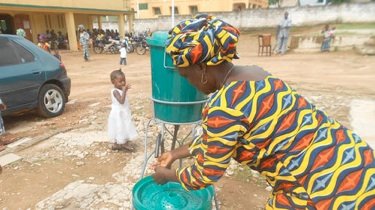 In Guinea, a woman uses a handwashing station provided by our partner.

Where has Ebola hit this year?

The outbreak of Ebola in West Africa is now posing a global threat. There are now more than 5,000 confirmed cases in Liberia, Sierra Leone, and Guinea, and the virus has now spread to Nigeria, Senegal and an outbreak has occurred in the Democratic Republic of the Congo. To date, the World Health Organisation has confirmed that there have been just over 2,000 deaths from the virus, making it the largest outbreak ever known. How is CAFOD responding? We are working with our partners to ensure that the right messages get to the most vulnerable people through community leaders they trust. This will help people to protect themselves and prevent the disease from spreading.

In Sierra Leone we have launched a training programme for religious leaders, which will empower them with information that they can share widely in remote rural areas; religious leaders are in a unique position to bust myths and ensure that communities take the right action to stop the spread of the disease. In Sierra Leone, Liberia and Guinea we have supported hygiene promotion in communities. Households receive prevention kits which included a bucket, soap and chlorine.  We are working through churches and mosques, and also with traditional healers and spiritualists who have influence within their communities.

What effect is Ebola having on society in general?

The outbreak is affecting the rest of the health system, as resources are diverted to treat patients, leaving clinics and hospitals unable to administer general healthcare, and having to close. Our partners tell us that because of restrictions of cross border imports of produce, and members of farming communities being affected by the disease, food is becoming scarce in some places, which has lead to prices increasing beyond the reach of ordinary people.

Does CAFOD agree with the Sierra Leonean government action of a three day lockdown to try and contain the virus?

From 19 September until 21 September the government of Sierra Leone asked the population to remain in their homes so that volunteers and health workers could go door to door to support communities with suspected cases, or remove the bodies of victims to Ebola. The teams also handed out bars of soap and information on how to prevent the spread of Ebola.

The Ebola virus has hit 13 of the 14 districts of the country, killing more than 500 people. It is too early to assess as to whether this strategy has had any effect in halting the virus. The UN Security Council has declared the outbreak in West Africa a “threat to international peace and security.”

Is the Ebola virus affecting CAFOD’s existing work in the region?

The crisis has a regional dimension as Ebola significantly impacts on the entire West-African economy.  The underlying causes rapid spread of the disease are not just medical, but also have political, economic and security dimensions. The effects are felt at all levels – local, national, regional and global.

Many parts of Sierra Leone, Guinea and Liberia are affected by Ebola, and some communities we work with have been affected or are at risk. We are monitoring our programmes closely, taking careful measures to ensure our staff are protected, and we are also in constant communication with our partners to ensure we meet their needs as they undertake lifesaving work.

Gifts in Wills give us the funds we need to respond to emergencies as soon as they occur. One in eight of the people we reached last year were helped thanks to legacies. Help us prepare for future emergencies by considering a gift to CAFOD in your Will, or visit our website to donate now to our emergency fund.

Previous Post
One big family at the Centre
Next Post
Fighting Ebola: CAFOD staff and partners helping communities on the ground
Menu